3 Facts About Tungsten Weights for Fishing When talking about tungsten vs. lead, the first point of conversation is, “why should I dish out more money for tungsten, when my lead weights have been working just fine?”

Let’s clear this up right now. Tungsten weights cost more, because they are more expensive to make. Tungsten has a burning temperature of 6,192 F, which means it takes a warehouse, the proper equipment, employees and machinery to pour the jigs. Lead is cheap, which means even the smallest start-ups can afford to make them.

Now that we’ve discussed price, let’s look at some of the advantages of fishing with tungsten vs. lead.

The first and most noticeable difference is the weight and size of tungsten compared to lead. Tungsten is denser than lead, which means it’s heavier. This means if you’re comparing a 1oz tungsten jig to a 1oz lead jig, the tungsten is going to be almost half the size of its competitor. This is ideal for most types of jig fishing as having a compact head is often more advantageous. It also makes casting a smaller sized weight much more precise, even in windy conditions, when flipping and pitching your lure.

Because tungsten is denser than lead, it makes it a lot harder comparatively. This allows the angler to feel more at the end of their line, which makes it easier to navigate any changes at the bottom. This is especially great for low-visibility water. Tungsten weights also make a distinct noise when bumping off rocks, amplifying the sound and attracting more fish to your bait. Because it is so responsive, you’re going to feel every twitch and tug, making fishing even the most finicky bass that much easier.

Our ultimate goal is to promote fishing products that are going to increase our chance of catching fish. It’s always a bonus when you can also protect the environment and the end user. Lead was one of the first substances to be added to the list of toxic substances in the Canadian Environmental Protection Act. Not only is lead toxic to humans, but animals as well. It’s been blamed for population decreases of many bird species throughout Canada. For the Loon specifically, lead ingestion is the number one cause of mortality.

An accurate analogy to summarize this debate would be considering your first vehicle as a teenager. – Yes, it got you to and from, and at the time it was all you needed. However, now that you’ve driven a newer model, or a luxury brand, it makes it a lot harder to go back to what you were driving before.

3 Facts About Tungsten Weights for Fishing 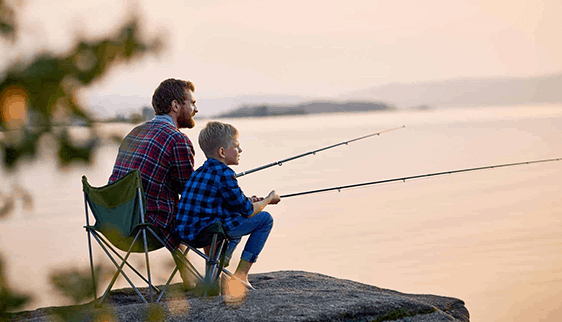 4 Things You Should Know About Fish and UV Light

How to Find Lake Trout Fish Under the Ice

4 Things You Should Know About Fish and UV Light

How to Find Lake Trout Fish Under the Ice

Since 2015 we’ve been committed to manufacturing tournament grade Canadian made fishing lures. Our mission is to develop and provide innovative tackle for both the amateur and professional angler.